We designed the upper cover as a rotating and sliding opening and closing. The upper cover can be fully opened without blocking it, which is novel and interesting but does not increase the difficulty of use.

T-CP8
In the era of a constant bombardment of notices, advertisements and streaming media subscriptions, we recall a past of pure music.
Optional button

Bring in the Bauhaus.

Inspired by the volume control knob and CD disc, the minimalistic volume scale is displayed on the surface of the CD player, pure simplicity.

Music and just music is our destination.

Every function and every control is designed with the singular purpose of delivering the music to you how the artist intended, pure perception. Remove cumbersome and overly complex functions that stand in the way and complicate things. Let users simply play and experience the music.

Flopping open and slapping closed was the standard operation of CD players and provided an opportunity for a sleeker cleanerdesign. Therefore, the upper cover smoothly rotates to open and close, secured by a clean magnetic click. The upper cover openscompletely to provide full access. It is novel yet intuitive and natural.

Use this text to share information about your brand with your customers. Describe a product, share announcements, or welcome customers to your store.

Can you remember unwrapping the packaging of a CD album, carefully looking at the cover, putting the CD into the player andpressing “PLAY?” Did you take out the lyric book and read along while listening? There were zero interruptions from notifications, advertisements or voice messages.  It was you and the music, exactly as it should be.

Every day we defer to our phones and computers to listen to music. Listening to a CD album has become a thing of the past. Consider if we are denied access to the internet and streaming platforms, or if internet access drops, or if our song simply gets removed from the service.  We will immediately realize the value and importance of possessing our own CD album.

Have been looking for a good portable CD player for years. I was glad to have stumbled upon this. Sound is fairly good for the money. The rubbery body material can be fingerprint magnet but it's fairly easy to clean off. One improvement I would suggest for future revision / model is that the noise floor is pretty high, especially when using lower impedance headphones. I appreciate the high output power. But pairing with low impedance and high sensitivity earbuds or IEMs is not ideal. Overall, I am very happy with this CD player. 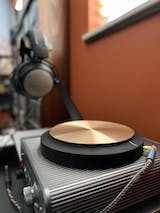 I do like this player. Good price, clever design, and a really nice sound. But I have three, minor suggestions.

First, on the black/gold version, you should color the buttons with lighter paint, e.g. gold to match the cover or even white. It's really hard to make out the function of each button when it's a black symbol against a black background. You have to actually pick up the unit and peer closely to see which button you're pressing, although I'm sure I will eventually memorize which is which. Right now, I guess by touch and counting from right to left! Lol.

Second, I would keep the digital readout on the same side of the circle as the buttons, and move the power switch and power light to the opposite. Right now, you have to choose between seeing the buttons or the readout.

Third, I have noticed that the device is too picky about older CDs. I tried to play a couple from the late 80s. They are in good condition: clean and no scratches. But the Trettitre grinded and rattled for a bit ... and then rejected them. Not the end of the world; I have plenty of newer ones. And older, remade CDs don't sound as good as vinyl or even modern streaming anyway. (At least I don't think so.) And that wouldn't be the Trettitre's fault. Still, it would be nice to play my whole collection, not just a large percentage of it.

All that said, I don't regret the purchase. Well done!

This was just what I was looking for. Now I can play all my cds that I have. The sound is good. I like this so well I have just purchased another one for my suv to keep in there. Can't believe they don't put a cd player in vehicles anymore. It's easy to use.

I
Israel Guibbory
Perfect for my car

Though the construction was a little light it won't skip when I drive over local streets. Car worthy but not like built-in.

DISCOVER THE BEAUTY OF SOUND